In my Bluebeard retelling, Bluebeard's ex-wives and their various body parts hung out in a rather funky Forbidden Chamber. I thought you might like to see how I made it...just in case you should have a need for a Forbidden Chamber. (Who am I to judge? Your private life's your own!).

I didn't want an actual room...our staging needed to be very simple and the set minimal. I just wanted a slightly creepy portal of some kind, so I decided a cabinet would probably be the best option considering the size of my tabletop puppets.


First, I found a cabinet. This is it - a boring, melamine bathroom cabinet. It came from the tip, and cost £3.00. My first step was to wash it, and give it a light sanding. 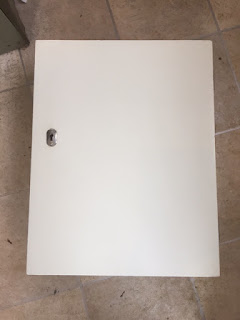 Next, I covered it with a layer or two of kitchen roll, stuck down with a mixture of PVA and water. This was to give it a slightly leathery, weathered look. 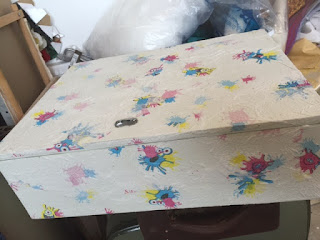 I stuck on two bands of string to give the effect of an old trunk, and also some paper doily scraps in the corners to suggest those metal corner pieces you get on luggage. Then I left it all to dry overnight. 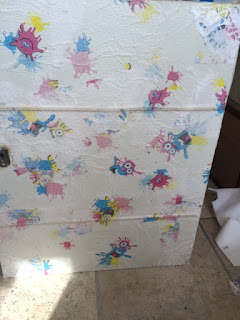 Then came the paint job...the fun bit. I knew i didn't want plain black, so I went for a grey-blue. I used acrylic, because that's what I had, but I think any paint would have done just as well. I stippled some black and some white and grey on too - it gave a verdigris effect. Then I left it to dry, and then rubbed on some gilding wax, called Treasure Gold. It's over a fiver for a tiny pot I think - but I have had the same one for absolute yonks - it never seems to run out. You just rub it on with your fingertip - just lightly across the surface rather than working it right in. This highlights the texture nicely. If you overdo it, you can easily paint some of the background over it again. 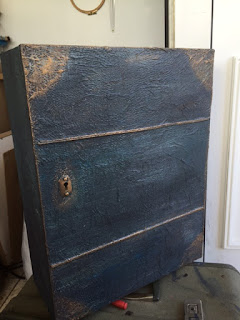 I quite liked it as it was to be honest, but I wanted Bluebeard to come across as the creepy obsessive he was, so I carried on! As a proper magpie I tend to collect things that I think will come in handy one day, or things I don't think will come in handy, but just like. I occasionally make miniature scenes set inside old clocks, which means I have a carrier bag full of old clock innards. A look at Pinterest confirmed my suspicion that clock bits are indeed quite Steampunky, so I stuck some on (with UHU). I also added some papers I had squirrelled away - an old photo I bought in a flea market, a bit of book spine, jewellery findings, bottle tops...just anything knocking around my studio I thought would look right. I wasn't trying to depict any particular era - quite the opposite, actually - I liked the idea that this weirdo was keeping and displaying a library date stamp from the 1950s alongside some Victorian scraps and a razor blade. (Then it occurred to me that I actually AM that weirdo...) 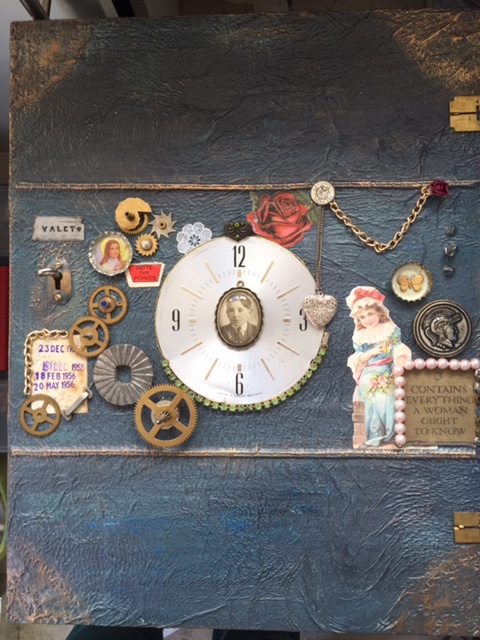 So, that's it! Afterwards, I lined the inside and cut out the back so that the puppet could be put through. Inside were fairy lights and red silk strewn with bones. Also, I attached some cup hooks on the back so that backdrops could be attached for other parts of the story. I don't have a picture of this unfortunately, but here is the ghost emerging. Katie Lenton, one of my fab puppeteers, cleverly mounted the cabinet on a turntable so that we could do scene changes with a mere flick of the wrist. (I use the royal "we" - Katie, Imogen and Lily did all of that while I sat and read the story!) 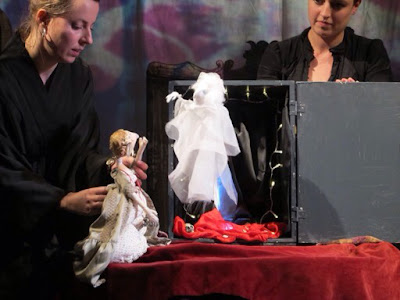 The cabinet and its inhabitants later came out on display at the Rottingdean Grange Gallery's exhibition. Follow the link to see the pictures from this really fun and beautiful exhibition.

Check back soon for more news...this time on the illustration front!

Well, it's been a while! Life has been extreeeeemely busy for me since we last caught up. I mentioned in my last post that I had met the wonderful Imogen Di Sapia, founder of Bright Moon Theatre. Well, a group of like-minded, mostly Brighton based folk started meeting at Imogen's studio for a monthly Puppet Circle, and the long and short of it is, that together we cooked up a dark and beautiful collection of Halloween inspired puppetry pieces, which became a show called The Crossing. We performed this at the absolutely delightful Bom Banes in Brighton. If you are within travelling distance of Brighton but have never been to Bom Banes, I insist you stop what you are doing and make every effort to go there as soon as possible. It's the quirkiest, most special little jewel you will come across for a very long time. It's...it's...oh just go there. You'll see what I mean.

For those that are still here...my own portion of the show was a retelling of Bluebeard. Re writing a folk tale for puppet theatre, making the puppets, devising directions and sounds...oh I learnt so much, with lots of help from my Bright Moon friends. I must say, not being a willing performer, I almost didn't go through with it. But I am so glad I did - it was a fab evening, and our little audience did seem to enjoy themselves. I had expert puppeteering from Imogen, Lily Waugh and Katie Lenton. Here are a couple of pics - of the puppets themselves and of them in action on the evening. 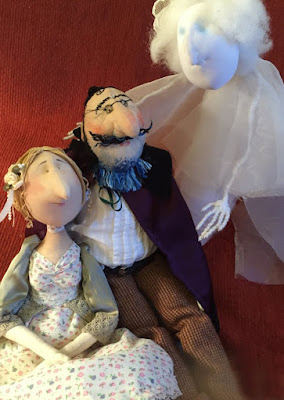 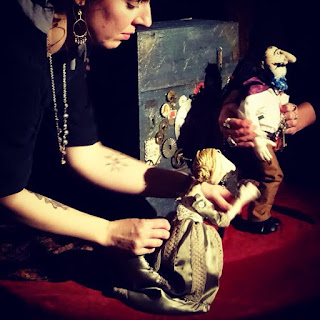 It would have been a shame to end it there, so we performed again, with extra music and storytelling, at the incredibly beautiful (and sadly to be bulldozed for development) Zu Studios in Lewes.

Anyway I feel you have heard more than enough from me for one day...but I have two treats for you for tomorrow! I will show you how I created the creepy Steampunk-inspired forbidden chamber (as seen above)...and I will share some thrilling news, too!

All text & images on this blog copyright Liza Stevens